Top ten Tuesday is a weekly feature hosted by Jana over at That Artsy Reader. This weeks prompt is Books that Awaken the Travel Bug In Me. Here are some books that make me want to travel to other worlds and places.

1. The Lion the Witch and the Wardrobe by C. S. Lewis – The classic story of traveling to another land. Whenever I hear about the land beyond the wardrobe, I want to travel there!

2. Strange the Dreamer by Laini Taylor – This book was one of my favorite reads of 2017! The tale of Lazlo Strange traveling to the lost city of Weep was so enchanting it made me want to travel to the city myself.

3. A Darker Shade of Magic by V. E. Schwab – The ability to travel across dimensions to different versions of the same city is such an interesting concept that would be amazing. Being an Antari would be amazing. 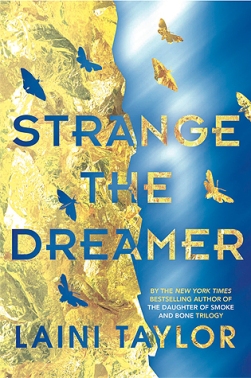 4. Under Different Stars by Amy A. Bartol – Kricket’s travels through a wormhole to an Alien planet that she is destined to save made the universe seem so much bigger and more attainable!

5. Clockwork Angel by Cassandra Clare – Stumbling into an entire fantasy world while going to visit family sounds absolutely magical (although a more friendly entry into the Shadowhunter world than Tessa’s would be nice).

6. The Scorpio Races by Maggie Stiefvater – The island of Thisby sounds like an amazing place for a vacation, and I would totally love to journey there to watch the Scorpio Races.

7. The Glass Swallow by Julia Golding – The world of this duology (Dragonfly is the first one) by Julia Golding is one that I stumbled into by accident and consequently could not put down. I love this fantasy world and it is one of the series that I’m constantly drawn back to. There is just so many places in the world to explore and I hope more books come out eventually.

8. Crooked Kingdom by Leigh Bardugo – This is the second book in the Six of Crows series, but more traveling occurs in this one that makes me want to travel all around the Grishaverse (from Ketterdam to Fjerda and back!).

9. Northanger Abbey by Jane Austen – A more low-key traveling story, but Catherine’s adventure to the Abbey was so funny and enthralling that it made me want to travel to an abandoned building in the country.

10. Red Rising by Pierce Brown – All of the space travel that happens throughout this series makes me want to travel throughout the solar system! I’m still waiting for a moon base vacation to be available. 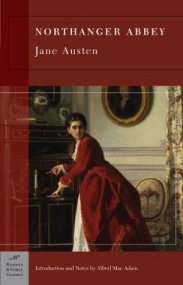 What books make you want to travel? 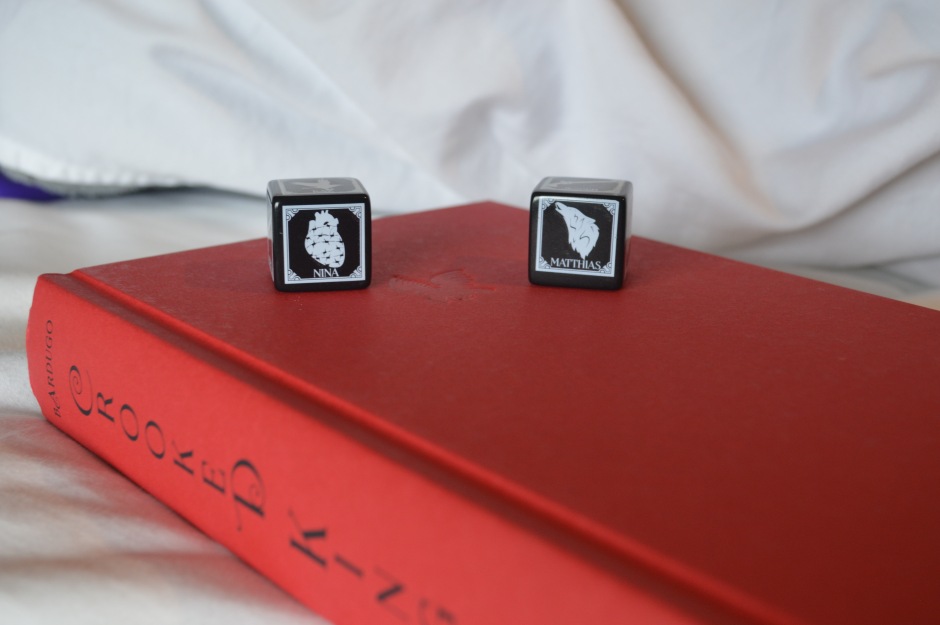 So I have been super busy with school and the first round of midterms, but I am finally able to take a pause today after my Saturday morning exam and begin Crooked Kingdom!
I absolutely loved Six of Crows (you can check out my review HERE) and can not wait to see where the story takes us.

I was fortunate enough to be able to order the books signed from Books of Wonder, and they came with a surprise sheet of tattoos inside! I had also previously signed up for a pre order bonus of a set of dice with game instructions, as well as a signed bookplate.

Let me just rave a little about how beautiful the books are without the dust jacket! I absolutely love the color red and the red cover and pages with the black writing is gorgeous. Also, the title crow imprint on the cover of both copies!

Hopefully I will be able to finish this book this weekend, if other work does not drag me back down! As soon as I finish, I will post a review.

Once again, don’t forget to check out my Etsy shop for bookish bracelets! 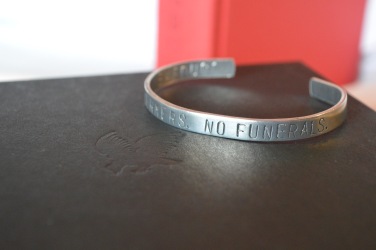 Six of Crows by Leigh Bardugo

Ketterdam: a bustling hub of international trade where anything can be had for the right price—and no one knows that better than criminal prodigy Kaz Brekker. Kaz is offered a chance at a deadly heist that could make him rich beyond his wildest dreams. But he can’t pull it off alone…

I read the first book in the Grisha Trilogy a while ago, and while I did enjoy it I never felt the pressing need to finish this series. Because of this, while Six of Crows sounded interesting and has been n my to be read list since it came out, I did not feel a pressing need to read it. Boy was I wrong.

Six of Crows is one of my new favorite books. Kaz Brekker is the perfect, vicious, anti-hero who you root for and love more than some of your favorite heroes. He is perfectly vicious and ruthless in his quest for riches. He always keeps you guessing with his plans, and I found myself thinking everything had gone awry multiple times, just to find out it was all going the way he wanted it to.

I love the story between Nina and Matthias, especially because it connects in many ways to the more specific world of the original Grisha trilogy. Perhaps I’m a bit sadistic, but I love couples who start out hating each other and grow into love (aka Rhys and Feyre).

I really like Wylan and Jesper’s interactions as well. It’s always refreshing for metal illness and disabilities to be shown in books, with the people being portrayed as ACTUAL HUMANS. There mini-romance is also adorable and I really hope that it continues to develop in the sequel Crooked Kingdom (which comes out on Tuesday!).

Inej is an awesome acrobatic “wraith” who was able to scrape her way up from forced slavery. Everything about her is awesome, from her clinging to her beliefs, to her ability to kill four men in under two minutes.

Now I can’t really tell about the plot without spoiling some major points, but it leaves you on the edge of your seat, never sure what will happen next.

The ending absolutely killed me, and is another reason that I’m glad that I put reading this book off because now I only have to wait 4 days instead of the year that other people had to wait! Definitely strongly recommend this book, for the engaging and perfectly horrible characters you will fall in love with.

P.S If you love this book as much as I do (or books in general), check out my Etsy shop where I have tons of awesome bookish bracelets for your literary soul. 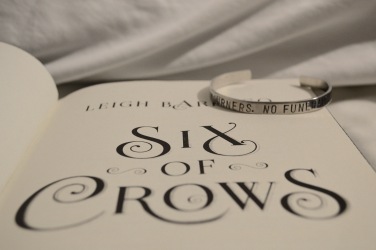 With the upcoming release of Crooked Kingdom, the second book in the Six of Crows Duology, I figured it was time to buckled down and read the first book. Although I am only a few chapters in, I absolutely love it! I am a total sucker for heist stories and I can’t wait to see where Kaz takes the team.

By request from Maggie at Massachusetts Novel, I made this lovely “No Mourners. No Funerals” bracelet inspired by the quote found throughout Six of Crows! 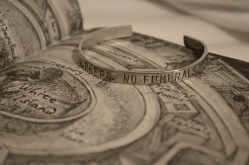 If you like what you see, check out my Etsy shop for more bookish bracelets! You can view pictures of my product in the Picture Catalog above, as well as follow the link directly!

As always, thank you for reading!