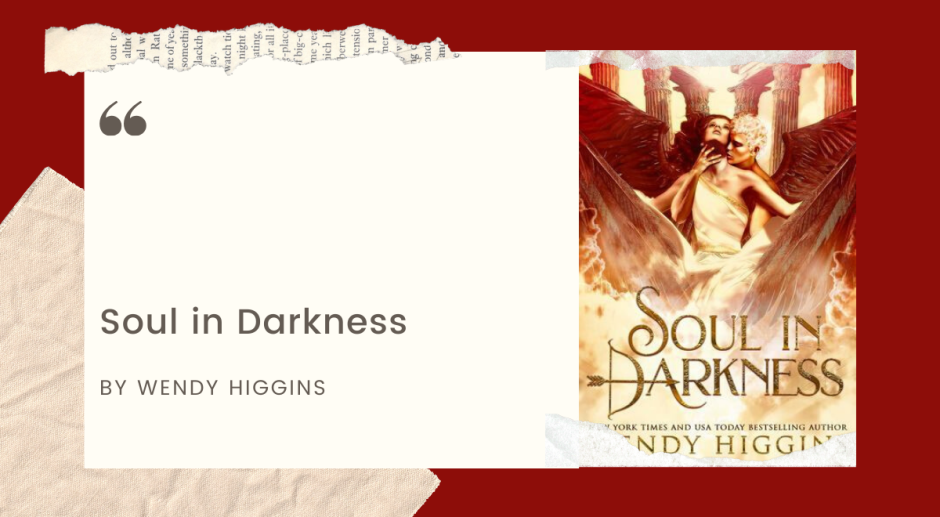 Soul in Darkness by Wendy Higgins

People travel from afar to the small isle in the Aegean Sea hoping for a single glimpse of Princess Psyche. Their adoration for the mortal woman is so all-consuming that citizens begin to shower her with the very gifts and offerings they once left at the alter of Venus, goddess of love and beauty.

But gods are known for their jealousy.

Cupid, the god of love, takes pleasure in causing strife and mischief in the lives of humans. He uses love as a weapon, humoring in the weakness of people at the whims of their feelings. When his mother Venus approaches him about punishing the human girl who dares to steal her offerings and affections from the people, Cupid gladly accepts.

Even though I consider myself a fan of Greek mythology, I was previously unaware of Cupid and Psyche’s myth or its relationship to the story East of the Sun and West of the Moon.

The author stated the book was initially meant as a YA crossover before she chose to make it an adult romance, and it was apparent throughout the novel. This was part of the reason that I ended up finding the explicit sex scenes throughout a bit jarring at times.

Pieces of it read very much YA, with Psyche acting like a typical 17/18 year old young adult novel protagonist which caused a bit of a clash with Cupid’s character. Cupid is often portrayed as overtly sexual, sometimes coercing affection out of Psyche at the beginning of their relationship. This makes the beginning of their “love” story seem a bit one sided, although they do reconcile and seem a good fit by the end.

The beginning half of the book is focused on the building relationship between Cupid and Psyche. This drags on for just a bit too long, causing a bit of a slump around the middle. I considered putting it down around this point, but am ultimately glad I continued because the pace picks up in the latter half of the book.